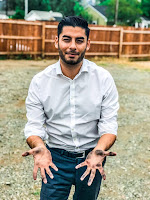 When and where can we hear this?

Thanks for asking! I just added the YouTube link to the end of the piece. Enjoy!