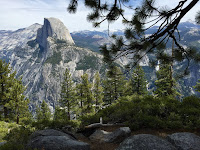 I’m walking from room to room holding my phone aloft like Lady Liberty holds her torch, waiting for the 4G icon to flip back to Wi-Fi. The video I’m streaming keeps buffering, buffering. Then suddenly there it is. The video resumes.
Whether it’s in our tech or in our soul, we all want better connectivity.
The word “religion” comes from the Latin religare, meaning “to bind or connect.” We turn to spiritual practice and our faith-communities to come out of isolation and return to our fundamental oneness. It’s lonely out here being a raindrop, longing for the sea.
So how do we return to oneness? How can we reestablish our fundamental unity? Maybe it isn’t as difficult as we think. What if we never really lost that primal connection, we only think we have? After all, how can one sever an inseverable tether? The 20th century teacher Nisargadatta Maharaj put it this way: “You are universal. You need not and you cannot become what you are already. Having never left the house, you are asking for the way home.”
When the Scottish-American naturalist John Muir came to America he was only a boy. His father schooled him in a strict form of Christianity, forcing him under the penalty of the lash to memorize and recite the entire New Testament. After spending a few meandering years at the University of Wisconsin Muir left with just enough scientific training to organize his life-long love affair with the natural world. Eventually winding up in the American west, Muir stumbled into the sacred valley of the Yosemite nestled high in the Sierra Nevada Mountains of California. Yosemite was his burning bush. After that, nothing would be the same – not for Muir, and not for the young country his work would inspire.
Muir often wandered Yosemite alone for weeks at a time with a bag of tea, a loaf of bread, and a volume of Emerson’s essays. Emerson’s neo-Vedanta philosophy, born from his immersion in the Vedas, Upanishads, and Bhagavad Gita at Harvard University, seeped into Muir’s pores and softened his strict fundamentalist upbringing. He began to distance himself from the small, impoverished God of his childhood, calling it “as purely a manufactured article as any puppet of a half-penny theater.” Muir found his God in the luminous Sierra Nevada Mountains, calling them his “range of light.”
Through his writings and advocacy, Muir’s nature mysticism shaped American consciousness, leading to the National Park system and the preservation of wilderness for its own sake – one of the boldest ideas in the American experiment. When Emerson, thirty-five years Muir’s elder, visited Yosemite and met Muir, he offered him a professorship at Harvard. Muir turned it down. How could he leave this cathedral of stone, these hallowed woods, this sacred light?
Muir found his connectivity in the mountains of California. But we can find it anywhere. God is found wherever the eye falls, at the tip of our fingers, in the sound of each other's voices, in the shimmering sun on the water, in the prescience of our hearts. Finding our connection point is as easy as slowing down, slipping into the eternal presence, and knowing that there is nothing but connectivity. Nothing stands alone. "When we try to pick out anything by itself," Muir wrote, "we find it hitched to everything else in the Universe."

[This piece first appeared in my "A to Zen" column in the September/October 2019 issue of Unity Magazine, and is reproduced here with permission.]
Posted by © Peter Bolland at 2:39 PM

Enlightening column. I feel most connected when watching Mother Nature, trees blowing in the wind, blooming flowers, morphing caterpillars and my dogs. To me these aer the purest form of spirit and connection.