By now fifty million of us have seen the viral YouTube video of Susan Boyle’s remarkable performance on the BBC show Britain’s Got Talent. It’s the most widely seen video clip in world history, surpassing previous skyrockets such as “Bush vs. Shoes” and “Tina Fey as Sarah Palin”. The footage is absolutely gripping on many levels because it holds a mirror to contemporary culture revealing what is best and worst in us. But mainly I’m writing about this because every time I watch it I cry and I’m trying to figure out why.

Susan Boyle is an invisible 47 year old woman from a tiny cluster of villages in Scotland. She’s the kind of woman you look right past – frumpy, unkempt, one of the many, not one of the few. In the years since her father died, Susan shared a tiny apartment with her ailing mother. Then her mother died. “I live alone with my cat Pebbles,” she told the show’s hosts. “I’ve never been married, never been kissed.”

“How old are you Susan,” Simon Cowell asked as she stepped on stage.
“Forty seven,” she said. Cowell rolled his eyes.
“O.K.,” he said, barely containing his boredom, “what’s the dream?”
“I’m trying to be a professional singer,” she answered. Cut to a tight shot of a young woman in the audience shaking her head disdainfully and turning to her friend in commiseration.

Then Susan Boyle began to sing. The song was “I Dreamed a Dream” from Les Miserables. It is the heartbreaking lament of a wounded-in-love woman whose youth, innocence and trust were repaid with disrespect, disregard and pain. And yet there is a note of defiance, of transcendence, of victory snatched from the jaws of defeat. It’s not in the words – which are unremittingly dour – it is in the proud clarity and upturned eyes of Susan Boyle’s magnificence. Looking at her face you can easily imagine – whether it’s autobiographical or not is irrelevant – that the song is about her, so perfectly does she channel its wrenching truth, that the world often mistakes and abuses beauty in its blind pursuit of vanity and insignificance.

Three seconds into her performance the mood in the room powerfully shifts. In one of the most spontaneous and explosive moments I’ve ever seen on television, the audience is swept away by wave after wave of shock and awe. People leap to their feet, their chairs no long able to hold them.

When the song ends, Piers Morgan is the first judge to speak. “Without a doubt, that was the biggest surprise I have had in three years of this show. When you stood there with that cheeky grin and said ‘I want to be like Elaine Page’, everyone was laughing at you. No one is laughing now. That was stunning, an incredible performance. Amazing. I’m reeling from shock…”

Then it was Amanda Holden’s turn. “I’m so thrilled, because I know that everybody was against you. I honestly think that we were all being very cynical, and I think that’s the biggest wake up call ever. And I just want to say, that it was a complete privilege listening to that. It was brilliant.”

Simon Cowell rounded out the panel with his usual panache, ending his remarks by saying, “Susan, you can return to the village with your head held high. That’s three yeses”.

Susan Boyle matters. She is a walking rebuttal to all the bullies who ever walked the earth, preying on the weak, demeaning the different, imposing their arbitrary definition of “cool” on the rest of us. The only people who are really cool, the people who define cool, are the people who are absolutely oblivious to the very concept of “cool” itself. They are so cool they don’t even know what cool is. Even the bullies in the audience were wiping their eyes and rising to their feet in thunderous applause.

The entertainment industry needs Susan Boyle. As record executives scramble to foist upon us the next cookie-cutter Barbie doll pop star, we the people have spoken through the pure democracy of the New Media. And here is what we said: all we really want is the Real. We don’t care what package it shows up in. We just want Truth and Beauty, you know, all that stuff Plato wrote about twenty five centuries ago, “even if in the form of an unlovely husk.”

Susan Boyle empowers and encourages us with her unapologetic presence. She exhibits the perfect combination of fearlessness and humility. She demonstrates that courage and arrogance are wholly unrelated. In fact, arrogance and machismo are usually sure signs of the utter absence of confidence and mastery. Real greatness is humble. She reminds us that it is enough to show up and simply do our best.

Most importantly, Susan’s unintended beauty reminds us in no uncertain terms of our own unrealized beauty. Through her we realize our own magnificence. I’m convinced that’s the real reason her performance breaks us open. Look at the faces of the people in the audience. Look at the lump in Piers’s throat. Look at the wonder in Amanda’s eyes. Look at the warmth, even the love on Simon’s face. We’ve never seen that face on American Idol, never, not even once. Susan’s bold presence triggers something deep inside us, something we have kept well-hidden; a profound and abiding self-acceptance, even self-love. It is a love we have been withholding. Her beauty breaks the anchor chain and we drift into the light of the knowledge that we are beings of infinite value. After all the years of drought, suddenly we are awash in love. This is what Susan has given us. That’s why there are tears. And that’s why Susan Boyle matters.
http://www.youtube.com/watch?v=5D5DgQi2oqA&feature=related
Posted by © Peter Bolland at 7:05 PM No comments: 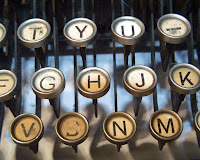 Normally, I have no problem coming up with topics and concerns to explore in this blog. But this month, I’m stuck. Maybe the two books I’m working on have drained all the words from me. Maybe it’s because I’m getting on a plane tomorrow to play a show in Washington D.C. and all the arrangements for that are eating all available brain waves. Maybe I’m just, for once, speechless.

Writer’s block is a mysterious beast. There are, naturally, numerous websites devoted to helping writers work through this strange malady – something to read while you’re not writing. It’s almost as if the language centers of the brain have collapsed in on themselves, like one of those awful third world high rises after an earthquake, and all the words are stuck inside, dead or dying.

The problem is manifold. Some say its lack of focus or purpose. No clear goal or goals. If you were passionate about your subject, they say, this wouldn’t be happening. There’s probably a metaphor in there for how I should live my life, but I’m too tired to find it.

Or it could be a sudden onset of shyness – you’ve grown weary of revealing your private observations, values and opinions to a vast, faceless legion of strangers. What, suddenly now you’re shy, after all these years of nakedness?

Any kind of creativity has its snags. It’s unrealistic to expect the flow to be perennially vigorous. Rivers and streams have their dry seasons. The trick is to somehow get across the sandbars, through the shallows and down stream to the source. The ocean, thankfully, shows no signs of drying up.

My favorite image of writing will always be my father. My parents emigrated from the Netherlands to America after World War II. There were few opportunities for a young married couple in Holland after the Germans got through with it. They landed in New Jersey and eventually settled in Ventura, California. I grew up without any cousins, aunts, uncles or grandparents. Outside of our little home, every Bolland we knew was far across the Atlantic. Apart from the occasional phone call, the only substantive link was the written word.

My dad would sit in the sun on the patio in our backyard with a portable typewriter on his lap, carefully typing nine page letters to the family back in Holland. He needed two copies, one for his parents and one for my mom’s parents. This was the sixties. There were no copy machines. He’d put a sheet of black, oily looking carbon paper between two sheets of very thin white paper (it was called “onion skin” back then – very thin and light to keep the air mail costs down) and carefully begin typing. No rewrites, no white outs, no mistakes. Total commitment. Just say it and move on.

I’ll never forget his quiet focus, his reverie, his near trance-like state as he hunched over that Olivetti crafting long stories of how us boys were growing up, or what the orange blossoms smelled like, or how the California sun felt on your skin. These accounts were my grandparents’ only link to their far-flung children and grandchildren living half way around the world. This wasn’t mere reporting. This was writing as an act of love.

This went on for years. There must be hundred of pages of this stuff. All four of my grandparents are gone now, and most of my aunts and uncles too. My dad has the letters. What’s most haunting is that they were all written in Dutch, a language I cannot read. My dad and I have often spoken about getting them translated, but it’s such a daunting task. There is just too much material. I feel something slipping away.

Whether it’s songwriting, prose, poetry, fiction or non-fiction, the process seems to be the same – if there is no compelling purpose for writing, no discernable reason to put pen to paper (or cursor to doc), then why bother? Art without hunger is art without truth. No matter how elegant the composition or fortunate the arrangement of elements, if there is no beating heart, no radiance shining through the fabric, no music, then it’s all just sound and fury signifying nothing. The key to overcoming writer’s block is hidden deep within the folds of this insight. It’s almost as if writer’s block is doing you (or your readers) a favor – it’s preventing you from writing a word until you’re in touch with what’s real.

My dad never had writer’s block. That’s because he wasn’t trying to write anything. He was up to something far more primal, more elemental. He was reaching out across the miles and joining lives together. What if we let that goal guide all our art?

We humans are by nature communal creatures. We need to tell each other our stories. I need you to know what I saw, what I heard, what I thought, what I felt. If I clamp it all down and keep quiet, something dies a little inside. And if I ever stop listening to the people around me, if I ever grow dismissive and tone-deaf to their music, a loneliness will well up around me and drown me.

The absurd popularity of social websites like Facebook, Twitter and MySpace testify to this incessant need to speak and be heard. Next time you compulsively log onto Facebook or sneak a furtive glance at your Twitter page during an important meeting, take inventory of how it makes you feel. There’s something going on there we haven’t quite grappled with yet. For all its lamentable ills, the interscape, as Jon Stewart calls it, plays a vital role in our communal human experience.

We no longer sit in the sun with portable typewriters on our lap and a sheet of carbon paper sandwiched between two onion skins. But we still utterly rely on the power of language to keep our love alive, whether it’s half way around the world, or half way around the block.
Posted by © Peter Bolland at 10:38 AM 2 comments: