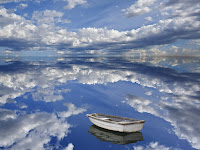 What is religion for? Is religion the destination or the vehicle? Is it the purpose of religion to provide pat answers, or help us ask better questions? Are religions fortified bunkers from which we can safely attack the religions of others? This is certainly how some people see it. But what if this fundamentalist perspective misses out on the real purpose of religion?
I’ve had the privilege of teaching comparative religion and philosophy for 27 years. On the last day of my world religions class I share Daniel Ladinsky’s translation of a poem written by Hafiz, the 12th century Sufi Muslim poet called “I Have Learned So Much.” It’s a perfect way not only to end our study of Islam, but to summarize the entire course, if that’s even possible.
What Hafiz captures so beautifully is the Buddhist idea that religions are like boats – they get you across the river, but they are not the destination. Religions are the penultimate step. The ultimate or last step is realization, transcendence, oneness, and embodiment beyond all ideologies and doctrines. Then you come back to the world and get to work.
I love religions, but I belong to none of them. I love wisdom, but I don’t know what it is. It isn’t even an “it.” I don’t know how to talk about it because, as Hafiz says, “love has turned to ash and freed me of every concept and image my mind has ever known.”

I Have Learned So Much

I have learned so much from God
That I can no longer call myself a Christian,
A Hindu, a Muslim, a Buddhist, a Jew.

The truth has shared so much of itself with me
That I can no longer call myself a man,
A woman, or even a pure soul.

Love has befriended Hafiz so completely
It has turned to ash and freed me
Of every concept and image
My mind has ever known.

Like mystics the world over, Hafiz affirms the fundamentally unknowable nature of God or ultimate reality because whatever ultimate reality is, it is beyond all names and forms. It cannot be thought, it can only be experienced. Religions, therefore, only work as catapults – to throw us out of our ordinary consciousness and into the boundless depths of the sacred.
In another twist on the boat analogy, Hafiz playfully puts it this way in his poem “The Great Religions”:

The great religions are the ships.
Poets the lifeboats.
Every sane person I know has jumped overboard.
That is good for business isn't it Hafiz?

Maybe he’s right. Maybe poetry, especially wry poetry with a sense of humor, is the medium that best strips away our intellectual and tribal defense mechanisms. But to poetry I’d also add ritual, prayer, meditation, service, study, community, reverence, appreciation, and love – especially love. All of these work just as well as poetry in washing us clean and leading us to the table where the divine feast is laid before us by the infinite abundance of the universe.
Maybe even poems do too much. In his essay “Self-Reliance,” ex-Unitarian minister Ralph Waldo Emerson put it this way: “I like the silent church before the service begins better than any preaching.” Sometimes all of these clever words ruin what was almost ripe.

[This piece was first published in my column "A to Zen" inthe May/June 2019 issue of Unity Magazine, and is reproduced here with permission.]
Posted by © Peter Bolland at 7:13 AM No comments: