The Storm Before the Calm 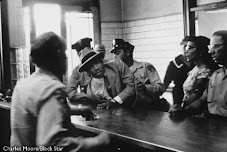 From Jesus to John Lennon wisdom teachers have asked us to give peace a chance. In times of widespread unrest and social disruption, it’s understandable that well-meaning people call for peace and love. But a note of caution is in order. In our calls for peace, is it universal love we’re after, or silence and compliance?

Is the light of truth meant to comfort us, or jar us awake?

When Rev. Dr. Martin Luther King Jr. and the Southern Christian Leadership Conference went to Birmingham, Alabama in 1963 they went there to cause “good trouble,” to borrow a phrase from John Lewis. Even though school segregation had been struck down nearly a decade earlier by the US Supreme Court, many southern states continued to enforce Jim Crow laws. King went to Birmingham to protest these ongoing segregation statutes, and his method was to purposefully violate a court order banning parades, protests, pickets, boycotts, and marches. They went there to cause good trouble. And they did.

King and his movement filled the streets of Birmingham, braved Bull Connor’s fire hoses and dogs, and through television, brought the nonviolent struggle for human rights into America’s living rooms. Many were arrested, including Dr. King. In the Birmingham newspaper there was an op-ed penned by eight white clergy criticizing King’s methods. King grabbed a pencil and began writing a response in the margins of the newspaper, then on scraps of paper a fellow prisoner gave him. In his “Letter From Birmingham Jail,” King makes the case that nonviolent “good trouble” is a necessary last resort because it’s the only thing that brings the dominant culture to the negotiation table. “Nonviolent direct action,” he wrote, “seeks to create such a crisis and establish such creative tension that a community that has constantly refused to negotiate is forced to confront the issue.”

King grounded his argument in the philosophy of Augustine, Aquinas, Niebuhr, and Thoreau – the idea that it is right to break human laws that violate moral or natural law, as long as we do it in an open, self-sacrificing, and compassionate way. In fact, it is our sacred duty to do so. As King famously wrote, “Everything Hitler did in Germany was legal.”

“History is the long and tragic story of the fact that privileged groups seldom give up their privileges voluntarily,” King wrote. “We know through painful experience that freedom is never voluntarily given up by the oppressor; it must be demanded by the oppressed.”

Now it is our work to re-perceive social unrest not as lawlessness and disorder, but as the messiness required in any birthing process. Think of it as “creative tension.”

The source of Dr. King’s greatest frustration was not the explicit racist, but the well-intentioned white moderate who agreed with the goals, but counseled patience while mouthing platitudes of law and order. “The Negro’s great stumbling block in the stride toward freedom is not the Ku Klux Klanner,” King wrote, “but the white moderate who is more devoted to ‘order’ than to justice; who prefers…the absence of tension to…the presence of justice.”

Peace and harmony is the ultimate goal – on that we all agree. And when all human beings are afforded their God-given rights of dignity, access, and abundance, then peace and harmony will break out all on their own. But until there is justice, the façade of peace is reserved only for a privileged few, bought with the wages of systematic oppression. And that is no peace at all.

[This piece was first published in my A to Zen column in the November/December 2020 issue of Unity Magazine, and is reprinted here with permission.]