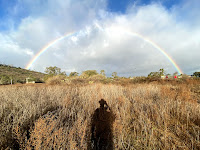 In his classic The Hero With a Thousand Faces (Pantheon, 1949) Joseph Campbell mapped out the 17 stages of the archetypal hero’s journey. Throughout mythology, literature, and film, the hero’s journey crosses all cultural and temporal boundaries, from the first Paleolithic camp fire to the surround sound multiplex. No matter the medium, the message is the same – we must journey beyond the boundaries of our ordinary life, risk it all, and, figuratively speaking, die to be reborn into our authentic nature. In the end, the hero’s stories are our story. Each of us is the hero of our own life.

It turns out hero stories are not about extraordinary people – they’re about ordinary people unlocking extraordinary powers both within and around them. To the true-hearted hero, nature itself becomes an ally. The trick is awakening those latent powers and wielding them with wisdom. And we don’t have forever. This is it. As Campbell liked to say, “If you don’t get it here, you won’t get it anywhere.”

The only thing required to unlock these powers is the willingness to take the journey, to say the holy word “yes,” and to trust. When the hero commits, the whole of nature rises up as an ally.

So you begin right where you are, and allies appear, the money works out, and doors open where there were only walls. This, says Campbell, is the first third of the journey – the departure. Then comes the initiation phase. You cross into the unknown and fall into the belly of the whale – think Jonah. This is a period of darkness and despair where none of the old rules apply. You’re powerless and stuck. Yet somehow you’re spit out of the other side and find yourself on the road of trials. Here you quest, struggle, and strive, usually with a band of fellow travelers, to eventually face the most powerful force in your world, what Campbell calls the atonement with the father. For Luke it’s Darth Vader. For Harry, Voldemort. In The Wizard of Oz it’s the wizard. And every time, when you muster the courage to confront the dragon, the monster, or the angry god, you realize two things – they weren’t as scary as you thought, and, you see yourself in them. You’re not that different.

Boon or prize in hand, the challenge shifts. Now the hero, (that’s you), must begin the third and final phase of the hero’s journey, the return. Simply put, you must break away from the bliss of realization and choose, in the consciousness of service, to bring the prize home. This is often the most dangerous phase of the journey. You might collapse and need rescuing. You might succumb to your own ego and sabotage yourself – think Darth Vader. The successful hero moves finally into a state of deep reconciliation and, like a bodhisattva, has one foot in nirvana and one foot in the world. The spiritual realization that transformed you becomes the elixir that will transform the whole world.

Then, returning home, one learns how to wield and integrate all of these insights into the ordinary world. In your heart, peace. In your mind, clarity. And in your gut a willingness to work for the healing of the world without anxiety or attachment to outcomes. And this, in the end, is the bliss that drew us out on the hero’s journey in the first place.

[This piece first appeared in my A to Zen column in the March/April 2021 edition of Unity Magazine, and is reproduced here with permission.]