I meditate because it frees me from the tyranny of my to-do list.

I meditate because twenty minutes on the cushion adds inestimable time and space to my day.

I meditate because when I honor my deepest calling, I feel every fiber of my being aligning into integrated harmony, a state I cannot create any other way.

I meditate because when I do I fall in love with the world and everything in it all over again.

I meditate because meditation is the great homecoming, the return to our authentic nature.

I meditate because in the stillness all of our interlocking systems -- intellect, emotion, energy, body, spirit -- return to their natural set-point and are restored to their ideal interrelationship.

I meditate because I'm a hedonist at core -- I'm drawn to the higher pleasures and the joy they afford.

I meditate because life is short and none of us has that much more time, and I might as well actually be here now instead of running madly through the echo chamber and hall of mirrors of my own conceptual madhouse.

I meditate because the world deserves the best possible version of myself; at core, all spiritual practice is world service.

I meditate because my greatest single contribution to world peace and enlightenment is to show up as awakened as possible.

I meditate because freedom, real freedom, is freedom from the tyranny of the thought stream.

I meditate because I'm drawn to the real, and find it every time in the silent boundless spaciousness beneath and between my thoughts.

I meditate because of the way love wells up through the cracks of my suffering when I hold still long enough to allow it.

I meditate because it is beautiful and subtle and profound.

I meditate because something deep within me asks me to.

I meditate because there is great and tremendous freedom in the word "yes."

I meditate because I can feel the darkness and fear dissipating when I do.

I meditate because. Just because.
Posted by © Peter Bolland at 7:13 AM No comments:

When a gardener plants seeds, she intends to yield a harvest. These dry, hard, yellow kernels will give rise to tall green stalks laden with ears of fresh, delicious corn. If everything goes right.
There are many phases to the process – deciding to plant a garden, envisioning the outcome, learning everything you can about soil, compost, weather patterns, fertilizer, insects, and the elliptic of the sun. But no matter how much we learn and how hard we work, the most important part of the process is intention.
Intention is the potent act of out-picturing – allowing our vision to move from the realm of thought into the realm of manifestation. We don’t control the weather, the sun, the bugs, or the corn – we are only their witness and collaborator. All creation is co-creation.
The wisdom traditions of the world warn us of the perils of confusing intention with attachment. “Work without attachment to the fruits of work,” Krishna teaches in the Bhagavad Gita. And in the Sermon on the Mount Jesus counsels us in no uncertain terms to renounce all anxiety about the future. Worrying isn’t going to add one inch to your corn. And Lao Tzu in the Tao Te Ching put it this way: “Rushing into action you fail. Trying to grasp things, you lose them. Forcing a project to completion, you ruin what was almost ripe.” You can’t make the corn grow faster by yelling at it, tugging on it, or nervously pacing up and down the rows.
Our job is not to grow the corn. Our job is to co-create the conditions in which the corn can grow itself. Corn already knows far more about how to become corn than we do.
Whether we are growing corn, raising children, or building a career, the same principles apply. All we can do is set intentions, hold aspirations, and envision fruition. But the minute you slip into the seductive delusion that you are in control, chaos reigns and the only crop you’ll yield is suffering for all involved.
Many of us have worked for micromanagers, bosses who hover over you directing your every move. Under these meddlesome taskmasters workers lose their two most potent qualities – innate enthusiasm and creative problem solving skills. Nothing quashes the enthusiasm and creativity of a work team faster than micromanagement. Instead, hire great people, create the conditions in which they can thrive, and get out of the way.
Under micromanagement, employees stop trying and stop caring because they’ve received the message loud and clear: their essence isn’t valued or even necessary. They’re seen not as human beings but as extensions of the boss, robotic appendages without heart or vision. When you’re dehumanized, your soul lives in exile. The only reason you show up now is for the paycheck. Is that what anyone wanted?
As a leader you have two principle tasks – articulate the group’s intention, and manage the structural processes so that your employees don’t have to. As a leader, your only question to your employees should be, “What can I do to support you today?”
A leader is a planter of seeds. Taking leadership in your own life is a matter of humbly but boldly setting intentions, then letting go. As Lao Tzu wrote, "If you want to be a great leader, you must learn to follow the Tao. Stop trying to control. Let go of fixed plans and concepts, and the world will govern itself."

[This piece was originally published in my column "A to Zen" in the July/August 2018 edition of Unity Magazine, and is reproduced here with permission.]

The Ordinary Miracle of Meditation 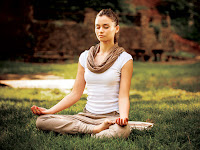 There’s an inherent paradox in meditation: it is at the same time easy and hard. It’s hard because ever since birth we’ve falsely identified with our thoughts and that’s a hard habit to break. But meditation’s easy because once you learn a few simple techniques you’re able to slip beneath the thought-stream into an indefinable depth. And then you realize – you are that depth, beyond all concepts and boundaries. This is less an achievement and more a discovery. In the crudest sense, meditation isn’t something you do, it’s something you allow. It’s as natural as breathing. But it helps to have a teacher.