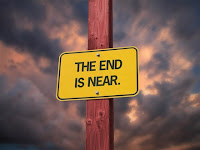 So the world didn’t end on May 21, 2011. This isn’t the first time. Ever since the Bible was written thousands of end-times predictions have come and gone. Despite the consistent and continual failure of all end-times prophecy people seem perennially willing to buy into the next one. Why is that?

The promise of impending disaster clearly feeds a deep psychological need. The zeal with which people foster and foment doomsday scenarios – catastrophic and irreversible environmental disaster, the collapse of the global currency market, the Biblical rapture, and all other forms of apocalyptic expectation – is evidence of the deep attraction disaster-scenarios hold for us. Something inside us wants to let go of the illusion of control – it’s not working anyway – and feel the freedom of surrender and non-attachment. Since we’re not very good at cultivating surrender and non-attachment consciously, the unconscious takes over. We unconsciously long for something or someone to come along and tear it all down.

We know that we live in a world of perpetual change. We know that all forms arise and all forms fade. We’re exhausted from trying to keep it all going. We want to let go but we don’t know how.

Learning to let go means willfully overriding tens of thousands of years of human evolution where fierce attachment and anxious worry ensured survival. Qualities that once served us now stand in the way of well-being.

Given the difficulties of retraining a mind shaped by the glacial forces of evolution, most of us don’t bother. We stay stuck in the consciousness of clinging, craving and conflict, drunk with the delusion that it is only through our own strenuous effort that anything good gets done. Some of us find our way to one or more of the world’s wisdom traditions which all invariably teach us to surrender and relax into the wonder of it all. The rest of us want to stay angry and resentful.

But the soul never for a moment stops asking for what it wants, what it needs. Our soul longs for the surrender of peace, but our mind refuses to give up the fight.

Things have a way of working themselves out. If truth is not realized in the conscious mind, it has a way of welling up from the unconscious mind. So powerful is our longing for surrender that out of the collective imagination fanciful scenarios emerge where everything is taken from us and everything is lost – the end of the world.

Most of us watched with bemusement as the recent doomsday prediction came and went. But what struck me was the powerful hold such prophecies have over their believers. Apparently reasonable people – writers, realtors, teachers, business owners – sold their businesses, said goodbye to their unbelieving family members and spent every penny of their savings in the days leading up to May 21, 2011. Many of them reported a deep peace welling up within them as all their worldly worries were lifted. “I’m not thinking about retirement funds anymore,” said one financial planner, “you know, 401Ks, annuities, commodities, stocks, the bond market or tax strategies. I’m living in the moment. I feel like a terrible weight has been lifted off of me.” We may find his belief system baffling, but this much is true: collective end-time mania has at least taught a few people the benefits of non-attachment.

Entering into the consciousness of surrender and acceptance frees you from the bonds of your own ego – there is no one there to do the controlling, no one to aggrandize by diminishing the other. Because you surrender to the reality of your own infinite value and the infinite value of the other, the idea of trying to control any of it seems ludicrous. All is as it should be, no matter what is happening. And frankly, it’s just exhausting trying to run everything, isn’t it?

The need to control is born from the consciousness of fear and the mistaken notion that we have to fight, claw and struggle our way through this world. An agitated, fearful and conflict-oriented mind experiences everything through the lens of its own violence. A gracious, surrendered mind finds its way through life’s challenges the way water flows through a boulder field – only effortlessness will prevail. Most of us are too busy trying to move boulders with our bare hands.

If unacknowledged, this soul-longing for tranquility and peace can deviate into dangerous pathology. Our unconscious longing to surrender control often manifests itself in unhealthy ways – drugs, alcohol, random sex, reckless driving, mindless consumerism, slavish devotion to gurus and other ideologues, and a myriad of other self-destructive, high risk behaviors. There’s nothing like diving off a bridge high above a river gorge with a bungee cord wrapped around your ankles to, for a moment anyway, free yourself from the tyranny of the busy-mind and drive you deep into the knowing that your joy lies in the surrender of letting go.

If we consciously acknowledged this, it wouldn’t manifest itself in such destructive and ludicrous ways. We would no longer need to concoct and cleave to elaborate impending disaster narratives that forcefully strip us of all control. If we made non-attachment our conscious practice, a new-found freedom and joy would arise. Gradually the destructive impulses would be replaced with an utterly ordinary sense of well-being.

In the pursuit of our careers, in the cultivation of our mastery as artists, musicians, teachers, doctors, lawyers, scientists and entrepreneurs, in our continuing drive to deepen our relationships with our husbands, wives, parents, children and friends, we must allow our innate longing for peace and surrender to manifest itself in healthy and meaningful ways. When we stop struggling and learn how to live in accord with the deep currents flowing forever around us we awaken the ancient dream – a dream retold in every wisdom tradition – to put first the kingdom of heaven, to accept as your birthright the peace that surpasses all understanding, to still the mind until, like a lake, all the silt has settled leaving nothing but clarity and depth. All of our endless grasping and clutching only stirs up mud clouding our vision and robbing us of our simplicity. The more we cling, the more we struggle, the more we suffer. The busy-mind works tirelessly to perpetuate the illusion of its own importance. When we awaken to the reality hidden just beneath the surface of the illusion, we move into wisdom. And wisdom means letting go.
Posted by © Peter Bolland at 7:50 AM No comments: