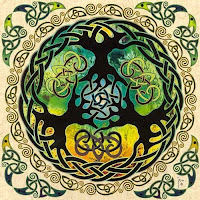 I just returned from Iceland. People keep asking me, “So, how was it?”
“It was great,” I tell them.
But what I really want to say is that it changed my life; that when I look at the photos my heart hurts with longing and my eyes begin to shine; that something about it moved me deeply, in ways I can never explain.
As an act of reverence for the enchantment of Iceland I set myself on a course of study I’d neglected for too long – Norse mythology. In 1,000 C.E. Iceland was the last European nation to convert to Christianity, and even then it didn’t outlaw the old ways – they stayed alive and thrive to this day. Jesus and Odin walk together across her fresh green fields and glacial moraines.
Iceland was first settled by Norwegians, then later by Celts. The spiritual landscape of Iceland is a mélange of Norse mythology, archaic Christianity, and Celtic mysticism. The gods of the Aesir and Vanir jostle for space with the huldufólk or “hidden people” – the elves, trolls, and fairies who inhabit the mounds and outcroppings that rise from the fields of every farm.
The veil between the seen and unseen world is very thin in Iceland.
In Norse mythology Odin was the oldest and greatest of the gods. Long ago, when the world was young, Odin disguised himself as a traveler and went to find Mimir’s well whose waters rose up from the core of the earth to nourish Yggdrasil, the world-tree. Legend has it that one drink from Mimir’s well would make one wise. When Odin found the well he asked Mimir for a drink. Mimir told him no, the water was only for him. But Odin could be persuasive. Finally Mimir agreed, if Odin would do one thing for him.
“What?” Odin asked.
“Give me one of your eyes.”
Without hesitation Odin performed the grisly task, tossing his eye into the well. Mimir nodded, handing Odin his horn.
Odin filled the horn and drank deeply. He felt wisdom flooding through him, and he was transformed. From then on he was known as the Blind God, although he still had one good eye.
Odin has many names and often travels in disguise. He’s tricky that way. He also has two ravens, Hugin and Munin, which mean “thought” and “memory.” They fly far and wide, and are the eyes of Odin. When you see a raven, Odin is watching. They return to sit on his shoulders and whisper into his ears all of the things they know and remember. So it is that nothing eludes Odin’s grasp.
One time Odin performed a great sacrifice in order to attain a higher state of divinity. He hung himself on the world-tree Yggdrasil for nine days and nine nights with nothing to eat and nothing to drink, his side pierced by a spear. His agony transformed him – he was now able to understand the sacred runes that once had no meaning. His resilience unlocked the secrets of the world.
Like gods everywhere, Odin stands as a metaphor for that which is unrealized in us – our highest manifestation. If, as Joseph Campbell claims, “each of us is the hero of our own lives,” then Odin’s story, like the story of any sacrificial god, is our story: evolution driven by the engine of resilience.
In a farmer’s field far off the beaten track, soaking in the roughhewn hot springs at Hruni, my wife and my friends and I let the warm waters wash away the weariness every traveler knows. In the late afternoon light two ravens perched on the roof of the stone cottage across the meadow – memory and thought. Odin is here. Our traveling, our struggles, and our sacrifices pull the threads that help us unravel the mystery of our own lives. We are all on the world-tree, wounded, and longing to become who we really are. One day soon, on the other side of these hardships, we will be able to read all of the runes.

[This piece previously appeared in my "A to Zen" column in the November/December 2017 issue of Unity Magazine, and is reproduced here with permission.]
Posted by © Peter Bolland at 2:16 PM No comments: