The Question of Happiness


[A version of this article originally appeared in the May/June 2013 edition of Unity Magazine and is reprinted here with permission.]

Sixty years ago, Abraham Maslow broke ground in the field of psychology when his “Hierarchy of Needs” suggested that there was a stepwise approach to realizing well-being. But does it conflict with the spiritual perspective that the “kingdom of heaven” is already within us? 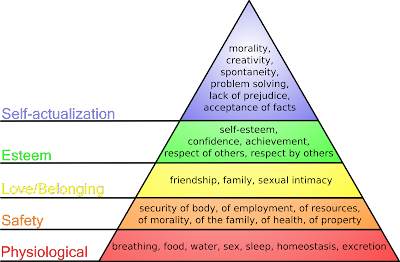 “Everyone has inside of him a piece of good news.  The good news is that you don’t know how great you can be!  How much you can love!  What you can accomplish!  And what your potential is!
~ Anne Frank

“The will to win, the desire to succeed, the urge to reach your full potential – these are the keys that will unlock the door to personal excellence.”
~ Confucius

Maslow’s hierarchy is best understood in the context of the human potential movement, a label given to the work of a disparate group of twentieth century psychologists, writers and teachers like Aldous Huxley, Carl Rogers, Victor Frankl, Alan Watts, Michael Murphy, Werner Erhard, Jean Houston and Anthony Robbins, among others.
In the seventies Erhard was best known as the founder of EST, (Erhard Seminars Training), an influential educational platform with ideological links to Scientology that now goes by the name Landmark Education.
Murphy founded the Esalen Institute, a Big Sur bastion of the consciousness cognoscenti, hosting seminars by the likes of Joseph Campbell, Carlos Castaneda and Deepak Chopra.  Another frequent presence at Esalen was Abraham Maslow.
Like other leaders of the human potential movement, Erhard and Murphy both worked hard to synthesize the insights of eastern spirituality and western psychology into a new understanding of humanity’s capacity to steer its own way out of ignorance and toward liberation.  Given the very different portraits of human nature in eastern and western philosophy, such a synthesis may not be possible.  In the west we are forever separate entities in relationship with a larger reality.  In the east we are that larger reality and our perceived individuality is one of the many illusions to be overcome.
Still, what aligns Maslow with these other luminaries is their assertion that human beings, both collectively and individually, possess a largely untapped ability to lift themselves out of ignorance and claim their birthright as fully realized beings.  This portrait of conscious evolution – from the pursuit of basic needs to self-actualization – puts Maslow’s hierarchy front and center in the human potential movement.
Posted by © Peter Bolland at 8:42 AM No comments: