The 1984 film “Amadeus” presents a fictionalized biography of Wolfgang Amadeus Mozart. The movie, and the Peter Shaffer play that preceded it, drives serious Mozart scholars nuts because it’s completely made-up. But who says art has to be true?

The Love of Money

“Money is the root of all evil,” he said, “it’s in the Bible.” I didn’t respond. People don’t like being corrected. Sometimes it’s best just to smile and move on.
Actually, I thought to myself, the line is “The love of money is the root of all kinds of evil…” (1 Timothy 1:6) It may seem like a small difference, but it matters.
Money isn’t the problem – it’s our rapacious craving born from the consciousness of scarcity that causes all of the destruction. “People who want to get rich,” Paul writes, “fall into temptation and a trap and into many foolish desires that plunge men into ruin and destruction… Some people, eager for money, have wandered…and pierced themselves with many griefs.”
What Paul’s lamenting is not money, but the spiritual poverty that goads us into the mistaken belief that our happiness lies in the meaningless acquisition of things. To fall into the love of money is to be pierced with many griefs. We must instead love the work, without attachment to the results.
Some voices in traditional Christianity have used these passages to support a dualistic philosophy that denigrates the material world as a treacherous lair of temptation, a trap our godly souls must strive to avoid. This arguably Medieval, life-denying, and otherworldly form of Christianity views the world of embodied forms as a fallen realm to be transcended. But that isn’t the only way to see it.
Other voices within the Christian family align more closely with their sister faiths Islam, Judaism, Hinduism, and Buddhism in their affirmation of the fundamental goodness of the material world.
In Hinduism, ultimate reality is known as Brahman, the sacred formless ground of being out of which all forms emerge and to which all forms return. In this non-dualistic view, the world of forms is a sacred reflection of divinity, a realm of infinite value and beauty. Even the creativity and productivity pouring through us is understood as yet another aspect of the one divine unfolding. Our longing to expand, whether spiritually, professionally, or materially, is not a sign of vice or self-obsession – it is simply Brahman giving birth to itself through us. Wanting a more beautiful home isn’t always covetousness – sometimes it’s just growth. Who are we not to create more, have more, and be more – not in the pursuit of self-aggrandizement, but in the spirit of playful enjoyment?
You’ve also heard it said that money can’t buy happiness. You know who talks like that? People who have money. It’s difficult to be happy if you have no shelter, you don’t feel safe, or you have no access to adequate healthcare. Poverty exerts terrible stress on the poor, akin to the traumatic stress experienced by combat veterans. Not knowing where your next meal is coming from, or worrying about whether or not the thin walls of your section 8 apartment can keep out stray bullets from drive by shootings make happiness a distant dream.
A raft of recent studies show that money does indeed buy happiness, up to a point. Happiness increases as income increases, up to about $75,000 a year. As income rises above $75,000, the happiness correlation drops off. And by the time you get to $250,000 a year, the correlation disappears. If you’re well into the six figures, money cannot buy more happiness. But below that it can, and it does.
If all is one, then our participation in the material world is a sacred experience. Doing the work we have been given to do, applying our God-given talents, sensibilities, and initiative to create products, services, and solutions for the needs of the world is everyone’s sacred purpose. When we offer up our best in the consciousness of service, people give us money for it. As we work in our given professions for a world that works for everyone, we honor ourselves, our creator, and each other. Earning money for honest work is a deeply satisfying, honorable pleasure. Using that money to provide for one’s family, enrich one’s experiences, enhance one’s safety, security, and enjoyment, cannot be evil.

[This piece was originally published in my column "A to Zen" in the July/August 2017 issue of Unity Magazine, and is reproduced here with permission.]

We Are Always Traveling 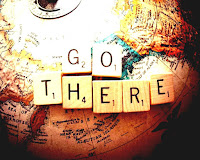