The Fear of Courage 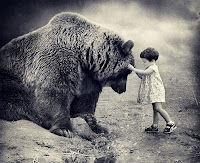 Fear is not a weakness. Nor is it a childish indulgence. Fear plays an essential role in the unfolding of our lives. Fear keeps us from touching fire, swallowing razor blades, and kissing rattlesnakes. Fear in and of itself is not the problem. It’s the misapplication of fear that causes all the damage.
For the ancient Greeks courage was the most important of virtues, for without it, none of the other virtues are possible. How can we be compassionate without the courage to love? How can we be strong without the courage to push past the limits of our endurance? And how can we be smart without the courage to admit ignorance and press onward into new areas of learning and mastery?
But courage is frightening. It asks us to risk everything.
I think we’re afraid of courage because courage asks us to abandon the supports we have worked so hard to construct. Courage asks us to sacrifice our safety and comfort. To be brave is to venture out beyond the reach of our protections, into an unknown field where none of the old rules apply and everything we know is irrelevant. To be courageous is to be vulnerable.
Courage begins with the willingness to let go. Courage and renunciation are two sides of one coin. Not only do we have to let go of our old support systems, we also have to let go of the idea that we are not enough. To be courageous we have to come to understand that there are qualities and strengths within us that have not yet been realized. Renouncing our old, limited, and limiting self-definition goes hand in hand with courage.
Courage is also an affirmation of the goodness of the universe. Fear, on the other hand, is often a misguided overreach of the ego feebly asserting its so-called power in an attempt to control everything. The fearful mind believes that we are not enough, and the universe is not enough either. Courage, on the other hand, means letting go of control and trusting that if the means are pure, the ends will take care of themselves. We must learn to use our egos, and not let our egos use us.
This then is the metaphysical foundation of courage – the view that all is one and that our lives are sacred expressions of the formless ground of being beyond all thoughts and forms. Debilitating fear is only possible when we have forgotten our original relationship with the divine. Again and again Jesus counsels his students to “fear not,” because anxiety and fear sever our delicate tether to the eternal. Coming out of fearfulness and into courage opens the portals to higher consciousness.
In the world’s hero journey tales the hero must face the monster again and again to be tested, and even more importantly, to have everything about them that is underdeveloped and inauthentic stripped away by the ferocity of the ordeal. While we may not literally be fighting monsters, the underlying truth remains. There are obstacles between us and the life we were born to live. Without cultivating the courage to face them, we rob ourselves and the wounded world of the healing elixir our transformation would bring both to our own lives and the lives of innumerable others, for when we heal ourselves we take an enormous step toward healing our families and communities. Instead of running away from fear, we should be running toward it. As Joseph Campbell wrote, “The cave you fear to enter holds the treasure you seek.” Without courage we will never know who we really are. Only courage unlocks our sacred potential, latent within us and, for now, hidden behind a fog of fear. Courage is not the absence of fear. Courage is the willingness to act in spite of the fear – to feel the fear and do it anyway.

[This piece first appeared in my column "A to Zen" in the March/April edition of Unity Magazine, and is reproduced here with permission.]