One by one they walked up to the microphone, each taking a turn. The stone amphitheater carried the sound deep into the canyon. High overhead a red tailed hawk soared across the sky in unraveling spirals. From our seats we could see deep into Mission Gorge where the San Diego River winds beneath a canopy of sycamores and oaks, through the heart of the ancient homeland of the Kumeyaay. For 10,000 years the original Americans lived in these canyons in the stillness of the pre-industrial world.

Are All Religions the Same? 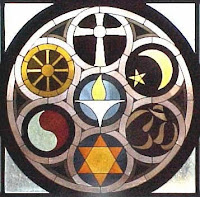 Mystics of all traditions have long held that the doors of the world’s numerous religions open into one room. “The Truth is one,” says the ancient Rig Veda, “though the sages call it by many names.” For Joseph Campbell, the endless masks of God hide the one face. And today, a thriving interfaith movement seeks new ways to embolden this ancient dream of unity. What if we are moving into a post-religious age, where our theologies and doctrines dissolve into one? When asked about his religion the Dalai Lama famously replied, “I don’t have a ‘religion’. My religion is kindness.” What if it’s just that simple?

But it’s not that simple. It’s one thing to imagine and intend a bright ecumenical future where all religious disputes are laid to rest. Creating such a world, on the other hand, is a tall order. Mystics, with their dreams of oneness and universal love are invariably heretics within their own traditions. There is considerable push-back from the mainstream which sees mysticism as a threat to its autonomy – a threat it is often willing to meet with force. Jesus wasn’t the only one killed for claiming God-consciousness.

Sometimes in our zeal to find the underlying unity beneath all faiths we overlook important differences – differences that deeply impact the lives of billions of people and shape civilizations. Religion does as much to divide us as it does to unify us. Without first confronting the fundamental differences between the world’s religions we cannot move past them. Denial and ignorance never solved anything.

Let’s look at three central questions and explore how the world’s religions have traditionally answered them. But before we do, a word of caution is in order: sweeping generalizations are dangerously misleading because they obscure the natural diversity of thought found within every religion. Saying “all Catholics belief this” or “all Muslims believe that” distorts the truth by rubbing smooth the complex and multifaceted array of positions found within any faith community. Nevertheless, generalizations, if used lightly and provisionally, help us begin the process of deepening and clarifying our thinking about the world’s religions.

Who or what is God?

Joseph Campbell made a useful distinction. In the religions that originated east of Iran, ultimate reality is generally understood as an immanent, impersonal energy within everything whereas west of Iran, ultimate reality is understood as a transcendent being, a personified entity above and outside the created world. This fundamental distinction would have far-reaching effects.

In Hinduism, Buddhism and Daoism this immanent source is known as Brahman, Buddha-consciousness and Dao, a reality beyond all concepts and definitions – the mystery behind the masks. All existence, including the gods, flows from this ultimately nameless source. In Hinduism this is particularly apparent. The many gods of the Indian pantheon are part of the created world, not its ultimate cause.

West of Iran a very different understanding of God or ultimate reality emerged out of Zoroastrianism, Judaism, Christianity and Islam. Here, God attained personhood and stands above and outside the created world. We are not manifestations of God-consciousness; He is the creator and we are merely creatures. This fundamental dualism shapes all of the other elements of the Judeo-Christian-Islamic worldview.

In the fundamentally non-dualistic eastern worldview the spiritual path is comprised of realizing one’s unity with this divine source, a realization covered over by ignorance. God-discovery is, in a very real sense, self-discovery. The purpose of religion and spirituality in the east is to awaken us to who and what we really are.

In the western traditions the spiritual path is one of obedience to a set of divinely revealed doctrines, beliefs and practices designed to bridge the chasm between us and a distant God, a God who cares, but a God who we have exiled through disobedience.

Another important difference between east and west involves the issue of inclusion and exclusion. If all is one as the eastern view claims, then we can realize Oneness through any number of means just as a summit can be reached from many different directions. No paths are excluded. If, however, there is only one tribe or creed the transcendent God favors, then joining the right religion becomes a matter of eternal life or death.

Understanding God as the divine Ground of Being within us and all things leads to one particular vision of human nature and human purpose. Understanding God as a personified deity outside the created world and ourselves as profane, disconnected products of that God leads to another.

What is a human being and what is our purpose?

In the western view, a human being is a mixed bag – made in God’s image yet terribly limited at the same time. Higher than the animals, lower than the angels, we are here to live as best we can in accord with God’s love and fulfill our divine appointment with as much dignity as we can muster given the mixed qualities of our nature. Jewish law, Islamic law and the guidelines of Christianity set the boundaries of authorized behavior. Obedience is rewarded and defiance punished. All three western faiths share the notion that we are called to be co-creators with God, working diligently for the good including practicing wise stewardship of the earth and its resources. Sacred service – giving our time, talent and energy for the good of others – is our highest purpose. When we participate in the healing of the world we are the hands of God.

Traditional, mainstream Christianity holds that because of our sinful nature we are adrift in self-imposed exile from God. All of the descendents of Adam and Eve carry within them an internal, irreparable flaw. We can’t think our way out of it, will our way out of it or wish it away. The only thing that can restore our severed connection to God is God’s grace. For Catholics this grace is accessed through membership in the Church and willing participation in its sacraments. For Protestants this grace is accessed through faith, belief and adherence to the word of God as recorded in the Bible. In Christian thought, thinking that you can “save yourself” is a grievous sin: pride. Without a relationship with the Christian God and adherence to Christianity’s codes, all is lost.

On the other hand, there is no doctrine of original sin in Judaism or Islam (or in Mormonism for that matter). In these faiths sin is understood as an event, not a condition; a lapse in judgment resulting in a violation of God’s law, not a genetic inevitability. This view of sin was also found in the early Christian church and advocated by some bishops like Pelagius, a British contemporary of Augustine who today is known mostly as the namesake of the Pelagian heresy. Augustine’s doctrine of original sin won the day and became Christian dogma. Pelagius and his followers were condemned and drummed out of the Church.

In the eastern view the nature and purpose of humanity is understood quite differently. If all is one, then every aspect of creation is an expression of the Divine, especially human beings with their capacity for reflection and self-awareness. The fact that most human beings are utterly unconscious or asleep to this fact in no way diminishes its veracity. Closing one’s eyes does not make the sky go away.

The tension in eastern religion is between ignorance and wisdom, not sin and salvation. We do not need to be “saved”, we need to be awakened. Buddha devoted his life to teaching a very effective awakening process, and countless gurus in the Hindu tradition did the same. In the great classic of Indian spirituality the Bhagavad Gita, Krishna teaches Arjuna a variety of methods for seeing past the illusory separateness of surface perception to the underlying unity of divine reality. We can attain this unitive wisdom through selfless action, through devotion and love, through study and through meditation, depending on one’s individual proclivities and preferences. The point is to awaken to who and what we really are and live authentically from our inner being, leaving behind the ignorance of our former lives, bound as they were by karma and the repetitive cycles of conditioned thinking. Shifting our identity from the surface ego in perpetual conflict with everyone and everything to the divine inner Self frees us from ignorance and opens us up to a life of compassion and joy.

What happens when we die?

While the Hebrew Bible is nearly silent on the issue of life after death, later Judaism arguably absorbed the powerful influences of Christianity and Islam on this issue so that today, all three western faiths share a similar understanding of the life and death process. God created our souls at a certain point in time (we have not always existed as the Hindus claim), then He put us into a human body where we live one life. At death our souls are judged and a determination is made regarding our eternal residency – cut off from God forever in hell, or basking forever in the beatific vision of God in heaven.

The eastern traditions are considerably more complex. In the Bhagavad Gita Arjuna learns from his teacher that death is not real. “There never was a time when you did not exist,” said Krishna, “nor will there ever be a time when you cease to exist.” The divine Self exists beyond time and space, beyond the duality of life and death, taking on many bodies in a lengthy succession of reincarnations. In the field of time everything flowers and fades, but beyond the temporal veil lay a vast changelessness. And that is where our true Self resides, whether we know it or not. Just as we cast off worn out clothes and put on new ones, so too we cast off these bodies and take on new bodies. The wise, said Krishna, see beyond the suffering of the physical realm to the implacable peace beneath all of these tumultuous processes. “All forms arise and all forms fade,” said the Buddha, and shifting our identity from the ephemeral flux characterized by craving and suffering to the underlying wisdom of Buddha-consciousness is the work all of sentient beings.

The urgency of the west, with its one life scenario and imminent divine judgment is entirely absent in the east. You have a long time to work out your wisdom. And no one needs to save anyone else.

These and many other differences between the world’s religions point out the difficulty in upholding a simplistic “all religions are the same” perspective. But what if beneath the cacophony of these very real and problematic conflicts a deeper stillness awaits? What if beneath these doctrinal variations a trans-rational, experiential reality stands ready to burn away all of our oh-so-interesting intellectual distinctions? Perhaps the Dalai Lama was right. Maybe it is simple.

Mystics of all traditions agree. Like white light through a prism, Truth splits into many colors when run through the prism of human understanding. A fundamental characteristic of wisdom then is the ability to see that behind all the conflicting truth claims lays a deep and unspeakable unity.


This article was previously published in the March/April edition of Unity Magazine under the title "Religion: A to Zen", and is reproduced here by permission.