The Mark of Paul 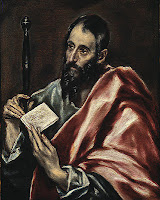 [A version of this article under the title "Sinners and Saints" first appeared in the September/October 2012 edition of Unity Magazine, and is reproduced here with permission.]

The centerpiece of the Christian narrative is the concept of human nature.  Are we inherently flawed and in need of outside assistance or imminently sacred and inherently unified with the divine?  How the apostle Paul’s interpretation of Jesus’ teachings shaped the Christian view of sin.

The Early Years
Although they were contemporaries, Jesus and the apostle Paul never met.  They never walked together down a dusty road, sharing figs and dried fish as they talked.  Paul, the Pharisaic Jew, never had the privilege of sitting in the shade of an olive tree and listening to the teacher share his fresh take on the Kingdom of God, a vision unmoored from the teachings of the Temple and rooted deep within his own experience.  Paul never felt the loving gaze of his teacher’s eyes, or the touch of his hand, or the way his wordless presence awakened others to their own divinity.
If Jesus and Paul had met, things might have turned out differently.
Instead, in the heady years that followed the state execution of Jesus, long before the first word of the New Testament was written, Paul did his best to cobble together a set of doctrines and practices from the scattered recollections of Jesus’ students and his own insights.
Paul became a follower of the nascent Jesus movement, known simply in those early years as “the way.”  It is Paul’s understanding, some say misunderstanding, of Jesus and his teachings that shaped Christianity more than any other source.  Paul pulled the movement together by writing letters to fledgling groups scattered around the Mediterranean in places like Corinth, Thessalonica, Ephesus and Rome – letters that set the tone for everything that was to follow.  Four hundred years later those letters were canonized by the bishops of the Church and became the inerrant word of God.  It is impossible to overestimate Paul’s importance in the formation of Christianity.  Almost half of the New Testament was written by Paul.

The Nature of Sin
Jesus spoke a regional dialect of Aramaic.  For him, the word sin would have been hob or hobha, a term borrowed from a commercial context meaning “debt.”  In Greek, the language of the New Testament, hob or hobha became hamaratia, meaning “internal flaw.”  For centuries, ancient Greek tragedians had employed hamaratia as the driving force of their plays, the plot element that brought down the protagonist in a paroxysm of pride and obstinacy.  For the Greeks, the most common internal flaw was hubris, a destructive, self-obsessed arrogance.
As soon as they were written down, the teachings of Jesus were altered by the unavoidable distortions of translation.
When the Bible was rendered into English, hamaratia became sin, derived from the old English word synn, an archery term meaning “to miss the mark” – yet another layer of meaning.
So what is sin?  Is it a temporary debt we can repay?  Is it a permanent stain no self-effort can alleviate?  It is a deeply rooted psychological flaw that will inevitably spell our doom?  Is it a simple mistake, quickly corrected when we release another arrow from our bow?
And how do we repair the damage?
How do we climb out of the hole and get back on level ground where we are no worse than anyone else, and no better than anyone else?  How do we restore our original status as beings of infinite value?  How do we lay bare the lie of our unworthiness and in the light of forgiveness walk across the bridge that spans the chasm of our alienation?

War and Peace
Paul and Jesus characterized our relationship with sin quite differently.  In Paul’s dualism, the material world and the spiritual world are locked in an eternal battle.  In The Gospel According to Jesus, Stephen Mitchell writes, “For Paul, the moral life is difficult, muscular and perilous.”  In Paul’s often violent portrait of the human predicament, we must cultivate the vigilance of warriors and gird our loins against the weakness of the flesh.  Declaring that “nothing good lives in me,” Paul seems to loath his own humanness and pines for the triumph of his spiritual nature, a transcendent force that comes from above.  The cancer within is “our sinful nature,” a power so great that we cannot overcome it with our will, yet struggle against it we must.
In his letter to the Romans (7:21), Paul writes, “When I want to do good, evil is right there with me.  For in my inner being I delight in God’s law; but I see another law at work in the members of my body, waging war against the law of my mind and making me a prisoner of the law of sin at work in my own members.  What a wretched man I am!  Who will rescue me from this body of death?”  Two thousand years of traditional Christian dogma take birth in this single passage – the claim that this world, including our own bodies, is hopelessly mired in sin, that sin is a condition, not an event, and that we’ll really only be free when we’re dead.
Jesus paints a startlingly different portrait of sin and the means of our release from its grasp.  Instead of battling against an adversary we can never conquer, Jesus asks us to abandon the entire paradigm of life as a struggle and move instead into a condition of consciousness characterized by surrender and ease.  “Come to me, all you who are weary and burdened, and I will give you rest,” he says in Matthew 11:28.  “Take my yoke upon you and learn from me, for I am gentle and humble in heart, and you will find rest for your souls.  For my yoke is easy and my burden light.”
The Sanskrit word yoga is etymologically linked to the English word “yoke”, and it is no accident that Jesus employs this potent agricultural metaphor to describe a deep psychological state.  In the same way a yoke channels the vast and undirected energy of oxen toward a specific aim, the disciplines of yoga seek to channel the vast and undirected energy of consciousness toward a specific aim, a fruitful harvest of awakening.  We’re always yoked to something, whether we’re aware of it or not, because our thoughts bind us to words and actions.  When we are bound, or yoked, to selfish, destructive thoughts, we are led down a path of suffering.  When we choose instead to follow our higher nature, our Christ-consciousness, we feel the struggle slipping away, replaced with serenity and divine alignment.  Conflict is replaced with cooperation, agitation with contentment.
Mitchell puts it this way: “For Jesus, there is no drama.  The more we surrender, the more we are carried along in the current of God’s love.  Not that good and evil don’t exist, but when you see into the realm beyond good and evil, where everything is pure grace, we are much less likely to be caught up in our own judgments and moral categories, and much more ready to experience every action as easy and natural.”
Know Peace, No War
By emphasizing the dualism of good and evil and our own inherently sinful nature, traditional Christianity bears the mark of Paul.  But what if Paul got it wrong?  What if the early church’s reliance on Paul set Christianity off on the wrong foot?
What if Jesus and Paul had met and become friends?  Perhaps Paul’s strident self-loathing would have softened in the loving gaze and unconditional acceptance of the master teacher.  Maybe he would have seen himself differently and written some very different letters.
Posted by © Peter Bolland at 9:02 AM 3 comments:

Guitar Solos That Made Me Cry 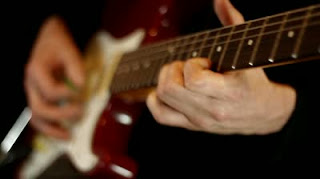